Life tends to take you places where you never intended to go. 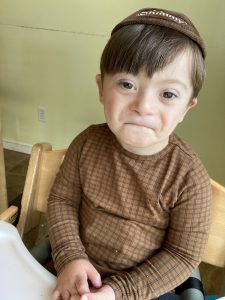 We were relatively young when we welcomed our fifth child into this world. He was a gorgeous little bundle. I held him close to me when suddenly this overwhelming feeling overcame me. In a panic I asked, “Is my baby okay?” His eyes were perfectly slanted. My questions and concerns were quickly dismissed when the nurse said, “You have a gorgeous little baby; why are you so worried? Rest up and he’ll be fine.” Moments later they took his Apgar score and rushed him to the NICU because he did not score well. I was crushed. I begged them to let me follow but until I wasn’t settled in the maternity ward they wouldn’t allow me to go. I waited impatiently. The nurses kept reassuring me that all was okay and my baby, born at thirty seven weeks, needed help breathing because his lungs weren’t fully developed. All would be okay.

My heart told me otherwise.

Finally, it was time to go to the NICU. I scrubbed my hands according to the strict instructions and entered a new world. My precious little innocent newborn terrified me. He was in a warmer, connected to different machinery and on oxygen. This was all new to me. His eyes still looked as slanted, as much as when they dismissed the idea of him having Down syndrome hours earlier. I now noticed a bulge on his stomach but stupidly told myself that not mentioning it would mean that everything was fine.

Later, I finally calmed down enough to take ‘Mazel Tov’ phone calls but asked that nobody visit me. I was not ready to let anybody see my baby for fear they would mention that he looked different. Some laughed and others yelled at me when I said, “I thought that my baby has Down syndrome but B’H he is totally fine.”

The next morning the head of the NICU entered my hospital room. He was nice, but admitted that he was wrong with the diagnoses and the breathing was not a lung issue but it seems like something was going on with the baby’s stomach, thereby affecting his breathing. This needed to be checked out and the hospital where I gave birth was not equipped for this.  They arranged to transfer him. I signed the release form amidst tears, knowing that this was the right thing to do.

Shortly after the ambulette left I got a phone call in which a woman introduced herself as a NICU doctor. She coldly mentioned that she just examined my baby and was pretty sure that he has Hirschsprungs Disease. I quickly grabbed a napkin from the nearby lunch tray and jotted down this information. I had a couple of questions starting with, “Is this chronic? How will this affect us on a daily basis?” Her terse answer was, “I am not sure yet, but have you ever heard of Down syndrome?” At that point I thought it was the end of my life. It was, but it was the beginning of a new one. Not an easy one, but one that has taught us a lot as a family.

Hirschsprungs Disease is a rare disorder. It is a defect of the intestines in which the nerves that push out stool are missing or not formed properly. Newborns with Hirschsprungs will often have bowel obstructions, which we now know was the bulge we first saw that caused the baby’s heavy breathing.

Hirschsprungs sometimes occurs in families and affects typical children or is sometimes associated with different syndromes like Mowat-Wilson syndrome or Down syndrome (there are other less common reasons). There are many levels of how one can be affected by this disorder. Some need corrective surgery at birth to pull a healthy part of the colon lower down. Others need the entire colon removed. Shimmy was somewhere in between. Emergency surgery was done and a colostomy bag was placed. This is a pouch that is placed below the stomach over an opening that is created to allow the stool to pass through a shortcut by redirecting the rectum. This is lifesaving and has to be done right away.

Life with an ostomy (artificial opening in an organ created through surgery) is not always easy as it is unnatural. Still, we are grateful for modern medicine. Hashem put us in this situation in the twenty-first century when there is a lot more research out there and surgeries like these are not so unfamiliar.

We brought our baby home a day after his due date, very differently than expected.  He was suddenly just ours. Neither I, nor my husband could bring ourselves to look directly at the stoma (an opening in the body).  The (colostomy) bag needed to be emptied about every three hours and changed because it leaked, which was unplanned. I put a lot of energy into avoiding changing the bag. My sister would stop what she was doing and come across town to change the bag just because she was brave and knew that we had a hard time dealing with it. If she was unavailable I would run over to a friend (who has dealt with similar medical issues) a couple of blocks away with my baby leaking from his stomach. The word ‘bag’ took on a new meaning. Things were more stressful than they should have been while we were trying to accept our new reality. My husband decided to be brave one day and although he felt faint at first, he ended up with a new job. He was now the official bag changer. One night, way past midnight, I smelled a leaky ostomy bag. My husband was out of town that night and I had nobody to turn to but Hashem. I knew the instructions of how to change the bag because I had been trained before discharge. I cried but I survived. I now took over the job of changing bags.

One day I took our little tzaddik, now named Shimmy, to a posh baby shop to splurge on cute clothes. I tried different cute outfits on him aiming to decide what to get, when the innocent saleslady said, “Wait, there’s something in there”, while she pushed the bag down causing it to pop and leak. I don’t think she realized what happened, but I quickly made my choices for the rest of the clothes, paid for the outfit he was wearing, and got home as soon as I was able to.

Many months later we were introduced to an ostomy nurse (I had no idea that such a person/position existed) who taught us how to better attach the bag so that it didn’t leak so often.

A lot of our immune system stems from our gut, therefore when parts are cut out one’s immunity is compromised. Shimmy has had many hospital stays with random viruses. He gets sick quite often and it takes him longer to recover.

With lots of Siyata Dishmaya and help from people we will forever be grateful to, we were later directed to a larger hospital with a colorectal team. Bowel disorders being their specialty, they were much more equipped to help us and give us appropriate advice.

It was time to put Shimmy’s body back together. He was now over two years old. It was very emotional but exciting at the same time. This was done in a two-step surgery, each one risky in its own way. During the first surgery the colon was connected and a new stoma was created out of the small intestines forming an ileostomy (a pouch from the ileum, the small intestines) to allow the colon to heal. Less than two months later he was back in the operating room to say goodbye to the bag. For some reason I was calm during that surgery. I just felt that he was going to be okay. The recovery, though, was awful. Shimmy was close to two and a half when he had his first dirty diaper a day or two after surgery.

For months after that he suffered from severe rashes and broken skin. This was new to him and his body wasn’t used to this.

During the last surgery the surgeon created a new stoma called an appendicostomy. This allows an enema to be flushed easily into the colon. Shimmy will most likely always be incontinent. His bowels must be flushed daily through his appendicostomy. Constipation and loose stools are Hirschsprungs’ constant enemies. He is on a lot of anti-diarrheal medication. He is at constant risk for enterocolitis, which is an infection in the intestines and requires immediate medical attention. He still gets rashes and is immune-compromised. But he is healthier. It seems that when organs are in their natural places it’s always better.

Shimmy is Baruch Hashem thriving despite his frequent hospitalizations and illnesses. He loves life. On routine days he loves looking at books, going to school and playing with his siblings.

Living with Hirschsprungs is not easy. It definitely helps us refocus and appreciate when things come naturally. It gives us a whole new understanding when saying the brocha ‘Asher Yatzer’.

May we all be zoche to long healthy lives.