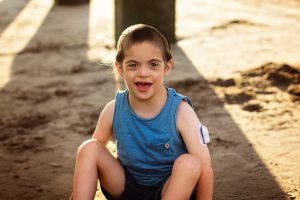 Mazel tov! A simcha! On January 6th 2012 our Chesky was born. The family was overjoyed. Our youngest at the time was almost four years old and both my husband and I, and our kids, were thanking Hashem for this additional gift. Our euphoria lasted about 24 hours. We were then notified that Chesky was showing signs of Down syndrome and would need to be genetically tested. Despite the shock and pain of his diagnosis we were told we were incredibly lucky; Chesky was ‘medically healthy’. He had no heart, feeding or breathing issues. We took our baby home the next day, ready to start a new life, albeit completely different than planned. Luckily, we did not know then just how different it would be.

For the first four years Chesky did amazingly well, reaching milestone after milestone more easily than expected. We did struggle with some issues, mostly typical for children with Down syndrome, but still considered ‘normal’. He had RSV as a newborn, making upper respiratory infections constant, ear fluid issues that resulted in him having tubes inserted more than once, and he was put onto Synthroid at some point due to hypothyroidism. Overall though, Chesky was a lechtiga happy child. And then came his fourth year, very much blurred today by his constant care, which started with just an overall feeling of – something is wrong! For over a month we drove our pediatricians nuts – visiting about every second day for different reasons and with different symptoms. They were amazing but we were being very vague, and honestly there wasn’t anything WRONG, but we knew there was something amiss, the question was what it was…… And then came first days Pesach. Being home with Chesky for a few days made us notice that he was incredibly thirsty, drinking constantly like he had been out in the hot sun for hours. Yom tov morning it clicked, having read somewhere about the link of thirst to diabetes. First thing next morning – Chol Hamoed- we were back at the pediatrician’s office. Our doctor was shocked when we filled him in on our observation and taking a blood sugar test confirmed what we already feared. His sugar was high, very high. To be fair, it was not something that was neglected since the typical age of diagnosis for Type 1 diabetes is in the early teen years. While it can happen in both young children, and even more rarely in older adults, it is not something that would have come to mind easily. Proper protocol at this point demanded being admitted to a hospital where they would intravenously correct his blood sugar and then teach us proper care to control it. Takes about a week. And it was Pesach. We had a family at home AND IT WAS PESACH! And so, our pediatrician gave us 2-3 hours to find an endocrinologist that would see us that day. It was that or the hospital. We started a mad scramble for assistance to find the correct doctor to help us. Today! Right now! With the help of our pediatrician and Chaim Medical (a medical referral organization) we were referred to the top-of-the-line pediatric endocrinologist – Dr. Mary Pat Gallagher at NYU. After hours of work and tears we got the appointment – now. And so, we left for Manhattan to spend our Chol Hamoed on what ended up being a 2-day crash course in diabetic care, B”H done as an outpatient, allowing us to go home to sleep. It was an intense course as we learned the nifluas Haboireh in the incredible working of the human body. We learned how the body produces sugar and how insulin counteracts it. What was normal, what was not normal and what was dangerous. We learned to prick – both Chesky and ourselves – (for practice) to take an Actual (a glucose reading taken from the blood) and how to give an insulin shot to control his sugar levels. We discovered how the healthy body produces insulin constantly (called background insulin or basal when given by shot) and how much and when to give for food (called a bolus). We also learned what to do for unexpected high or low blood sugars. We learned about carbs, protein and fat, how each causes the body to react and how they react to each other. We learned about nutrition labels and the math needed to figure it all out.

And so, overwhelmed and shocked, we started our diabetic journey. It wasn’t easy. For the first three months it was a complete, nonstop, 24-hour job. We had to take an actual every 2 hours day and night, and before and after eating. We then needed to document Chesky’s numbers and Every. Single. Bite. He ate. We also needed to note what was in that food, so that the medical team would be able to judge his insulin needs. While there are lots of medical tools out there to help, our team decided it was best to learn everything so that we understand it, not just relying on technology for help. It wasn’t fun; being that he was so young he would often ask for food, get insulin, and then decide not to eat leaving us frantic as his blood sugar dropped. Or he would constantly ask for more so that we would need to prick him again and again. It was a crazy roller coaster ride unique to young children who had no ability to understand the consequences of their actions.

It was after that learning period that we switched Chesky to an insulin pump. We were now able to deliver his insulin via the pump without giving him a shot every time. We opted for a wireless pump which needs to be changed about every 2 to 3 days but has no wiring attached that can be damaged by little hands. Insulin (which is in the pump) is given via a PDM (personal diabetes monitor), a small machine, phone size, that goes with him all over and has his personal regimen of how much insulin is given per carb so that only the amount of carbs he is eating needs to be entered. We also fought hard, and eventually received via insurance a CGM – continuous glucose monitor – a wonder that allows us to sleep at night!! It is a tiny chip (changed about every 10 days) that once attached to Chesky reads his sugar every 5 minutes and sends that information to our phone. No more constant pricking for his sugar levels. While it is just a machine which cannot always be completely trusted it is very accurate and has given us back our peace of mind. In addition, we are aware that there are more things in the works which we hope will soon become available for children, for example, a machine that gives both insulin and glucose automatically based on its own sugar readings.

Nowadays, Chesky attends Yeshiva Bonim Lamokom and is a bubbly, happy, very active boy. He B”H has a wonderful Rebbe who monitors his eating and gives him his insulin.

Chesky is our pride and joy.

P.S. We would like to make readers aware that diabetes is not the fully time-consuming job in most Type 1 diabetics as it is in our son. Nowadays, most young adults with type 1 diabetes can lead normal, healthy lives. In fact, due to their awareness of what all food entails, and how exercise affects the body and blood sugars, they can be healthier than their peers. Chesky’s fluctuations are caused by rheumatology issues – developed later – that cause stress in his body, which in turn causes continuous fluctuations in sugar levels. In addition, he has not yet reached the level of responsibility needed to understand and control himself when needed. We hope he will get there, one day…….