Nine months of a blissful and perfect pregnancy. Then came the day when our precious baby was born, which changed our lives forever! But seconds after birth they whisked him away, and there was a lot of whispering around our baby. Yes, it seemed like our worst fears were confirmed. Down syndrome. That was our introduction into the world of special needs. The main question was, how and what do we tell our other children? How were they going to deal with this information? Our oldest son was 18 years old and living in his own world of “perfection”. How were they all going to cope? Our youngest children would probably be fine, but what about everyone else? About four days after birth (when the baby was still in the NICU) we all sat down around the kitchen table and broke the news. First there was total, absolute silence and then CHAOS! Shouting, screaming … Our oldest son had no exposure to any special needs kids at all. His friends all had “perfect” lives, or so he thought. He was embarrassed and literally said he wanted to give this new sibling away. He was antagonistic and repulsed by this “new addition”. Fast forward 11 years … He never really got over it. He refuses to talk to little ‘special brother’ and to interact with him. Hashem, in His infinite wisdom, granted us an adorable grandson (my son’s son) and he plays beautifully with our special needs son. They shmooze, laugh and sing together. Far better than we would have dreamed!

Our daughter who was 17 at the time, had her own things to deal with. She was in her own little world of seminary applications and 12th grade fun. Her close friend had her own special needs brother who was very low functioning. She just assumed that her own brother would never amount to much. She thought her brother would be “just a nothing”. Boy, was she wrong! Now her own children play with her Down syndrome brother! Our 16-yea 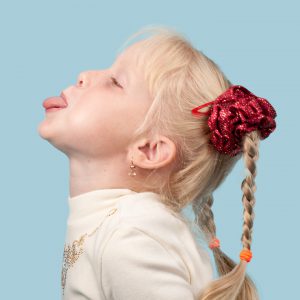 r-old son also had his own issues. Ignore and maybe it will go away….

The youngest siblings just never knew what life was like without him. They cherish and adore him and love him!!!

Our daughter, who was 12 at the time, actually has her Master’s in special ed and works with special needs children every day (autistic children).

Currently, our 18-year-old has eased into everything beautifully. She loves her brother and takes care of him and really cares! She enjoys seeing his pictures and calls him all the time (she is in Israel for the year). She is busy inviting all her friends to his Bar-Mitzva and is so proud!

Chasdei Hashem, we all emerged far better than expected. The older ones are still dealing with their issues – it will still take some time….

Moshiach is on his way and we are all waiting anxiously! Our Down syndrome children with their perfect neshamos will be the first ones in line to greet Him.